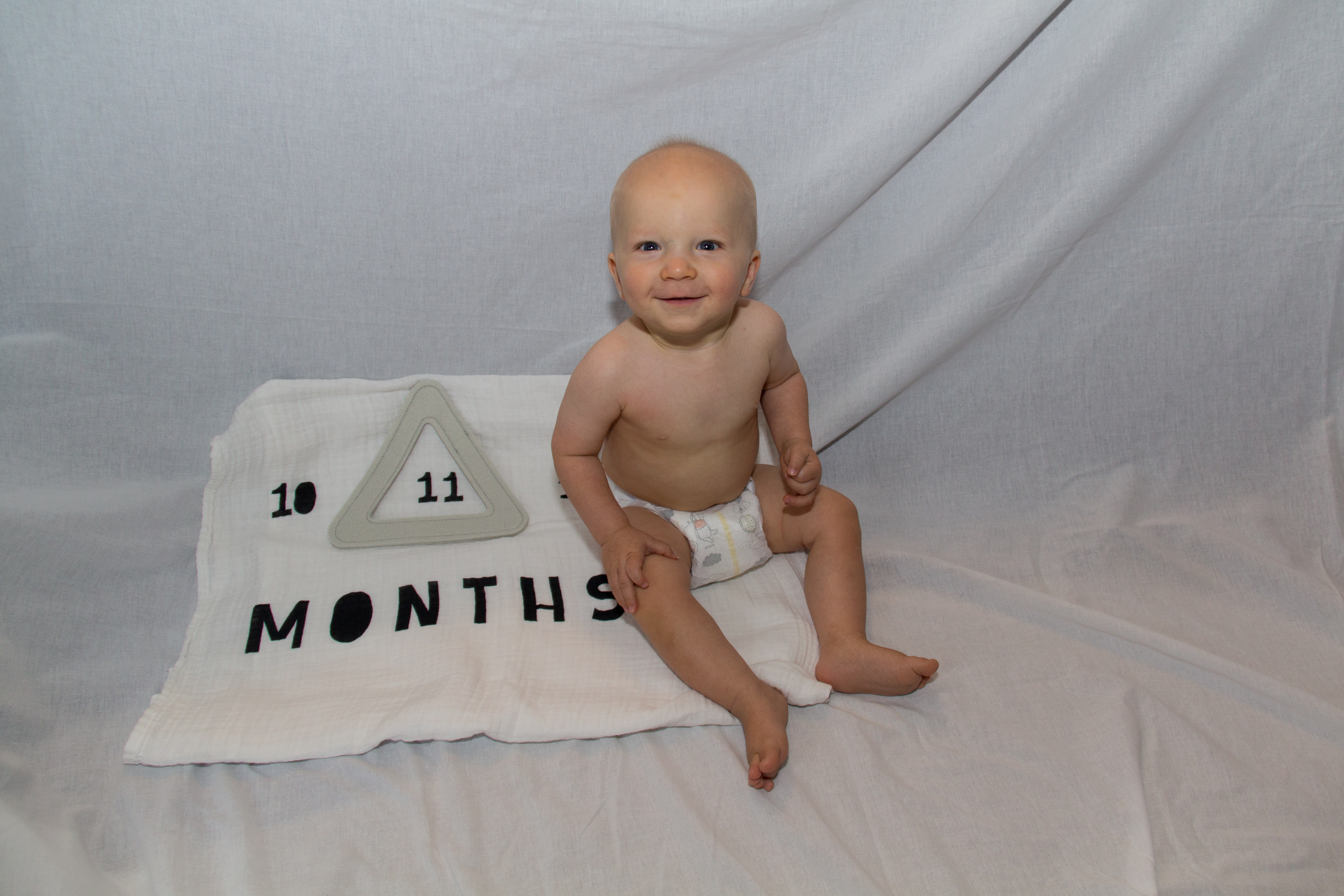 Well! Has it been a month! Every day you’re working out new skills, new sounds, new motions, and new ways to make sure that you have our attention before you crawl off and get into trouble. Your vocabulary has continued to expand this month, with “Yesss!”, “Ah duhn!” (all done), “Mo!” (more), and most importantly, “ni ni!” (night night). On a number of occasions, you’ll make a beeline for the base of the stairs and declare “ni ni!” while you try and get through the gate to get upstairs. We also hear it from the stroller if we’re out past 7:45 on an evening walk. You’re the first so far who’s a fan of his bedtime.

If the gates in the house are left open, you’re all about attempting to escape, from the gate on the stairs, to the gates in your playroom. Books and toys have become steps to try and figure out how to get over those gates. If the gate is left open anywhere, you’ll crawl through, and spin around to close it behind you, before heading off to explore the wide and wonderful world of the rest of the main floor. Your favorite spot to check is the dog’s food and water dishes. We prefer you keep your splashing to the bathtub. We also get little fingers under closed doors, which is quite cute, every time. Fortunately for all of us, you’re rather a noisy crawler, so it’s pretty easy to figure out where you are and what you’re likely trying to get into. 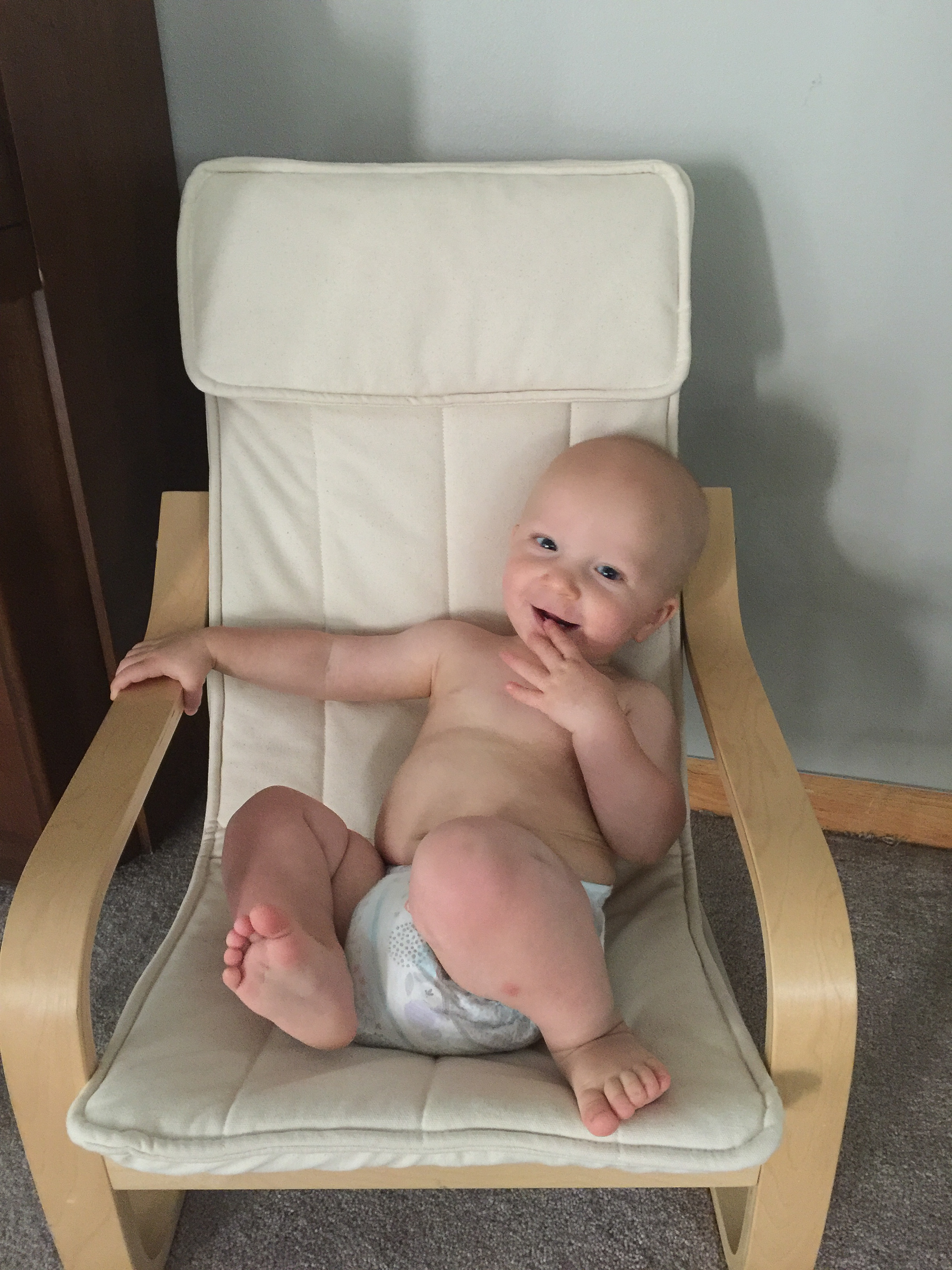 Climbing is as much an objective as crawling.If the stair gate is left open, you’ll be 4 stairs up in a few seconds, and headed for the top. We’ve seen you climb on the ottoman, as well as the couches with a little help. You’ll climb right up the slides at the playground, only to flop down at the top and slide back down. You’ve also conquered the little Ikea chair, victoriously standing to grasp the back and reach up the wall. 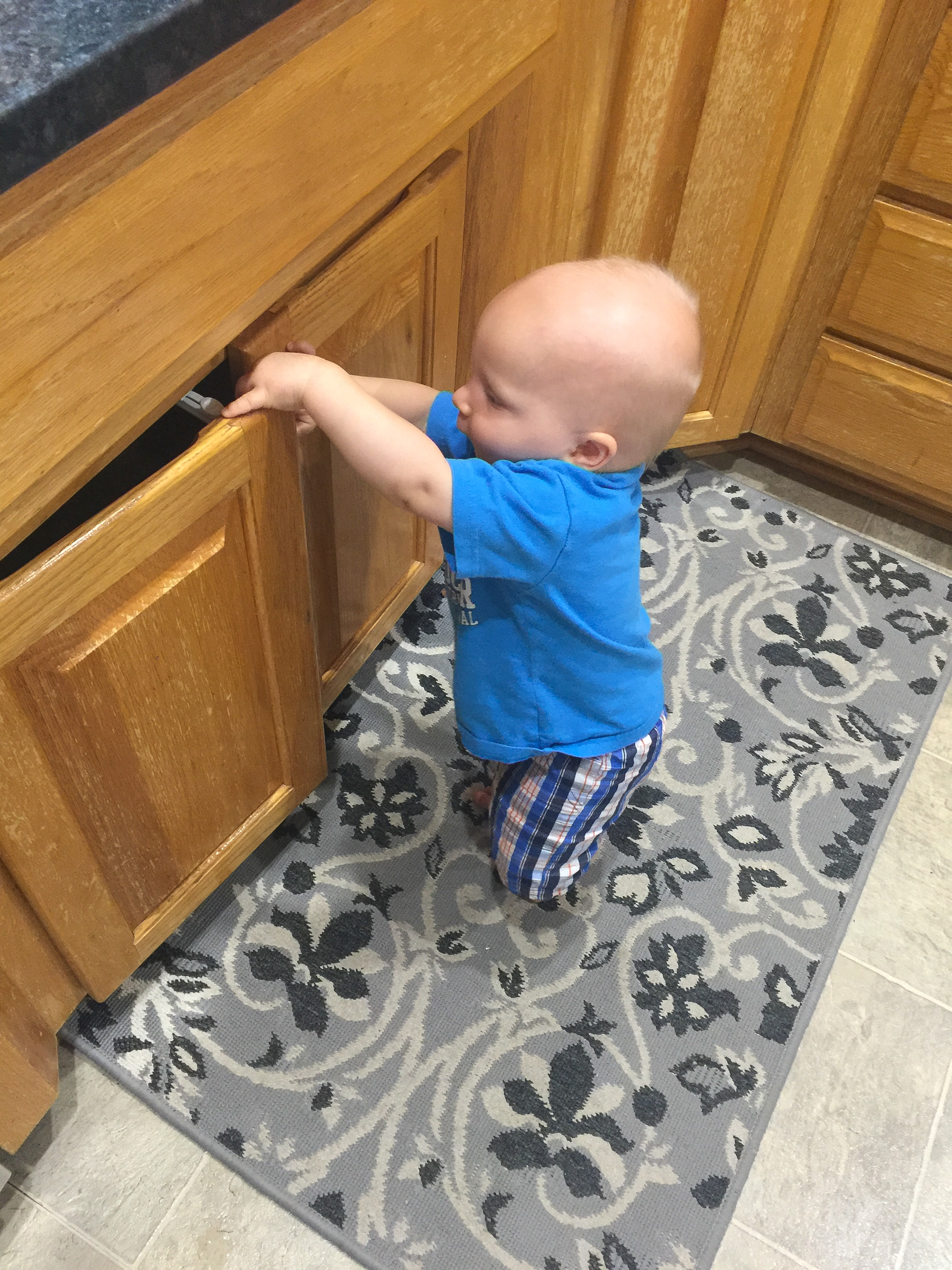 Fortunately, your brothers keep a pretty good eye on you. With four sets of eyes, you haven’t gotten into too much trouble yet. The last week, though, you’ve figured out how to climb up the little slide in your playroom, and have also figured out that you can push it over by the gate…more to come, I expect. At least we’ll be alerted by the “thud” when you hit the floor on the other side of the gate…

Your brothers have been in school for three weeks now, so you’re adjusting to scheduling naps around dropoffs and pickups. Nothing is more fun for you than picking up your older brothers from school. You completely light up and just chatter away to them when they get in the van. They love you just as much, and have a great time playing with you as well. Often, it devolves to them running around the house while you watch and laugh, but you’re getting faster on your knees and closer to walking. It’s just a matter of time before you’re fully chasing them around. 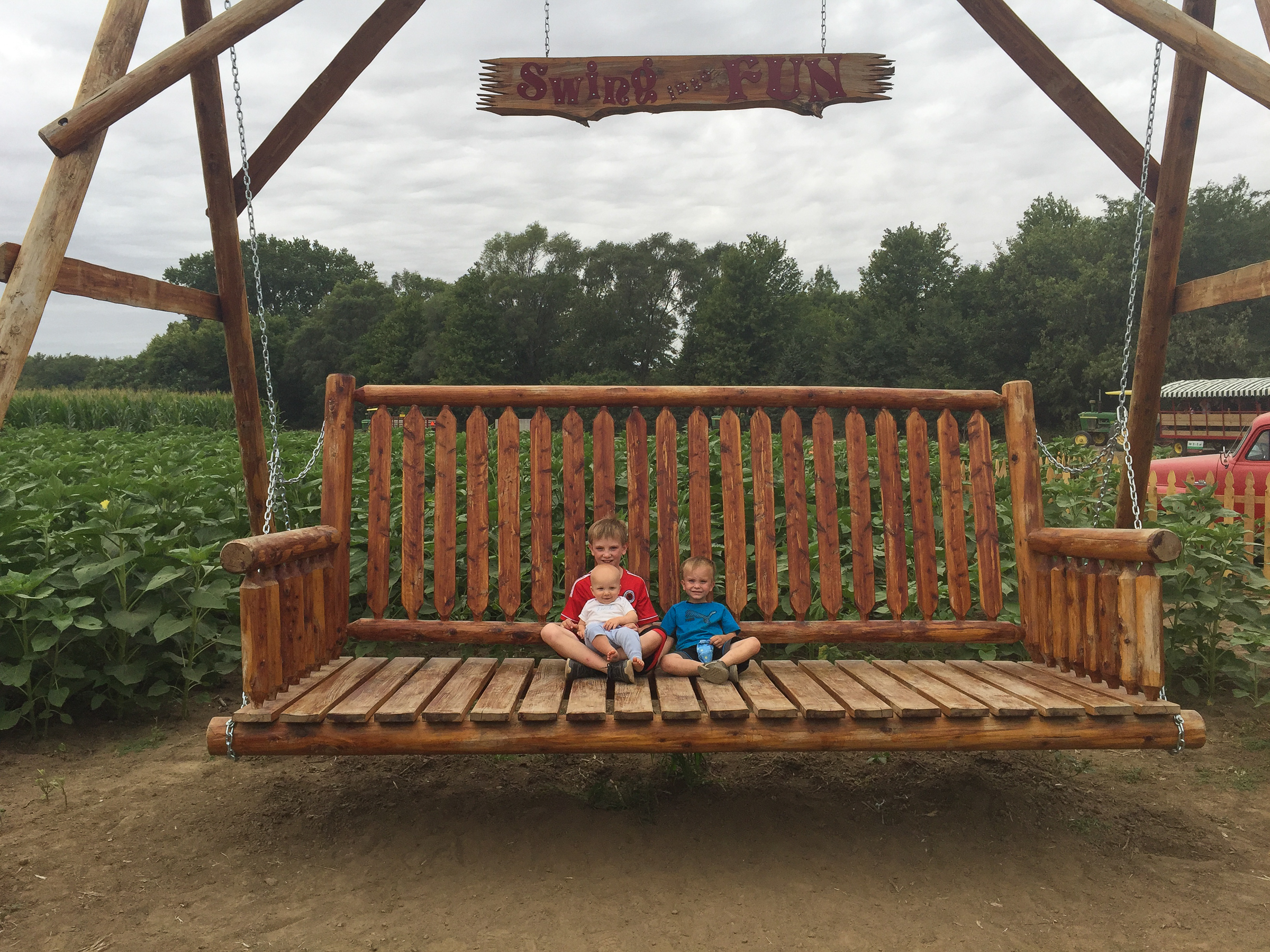 Being number three, you do spend a fair amount of time in your playroom while we handle homework, meals, cleaning, and all sorts of other things. You’ve figured out pretty well how to stay busy, though. All the books and toys will end up off the shelves in a time frame between “right now”, and “very shortly” each time you’re left to play. You’ve also figured out that you can fit behind the couch, in one side and out the other. Option three is to toss toys and blocks over the gate into the kitchen, while pointedly looking and squealing at mommy or daddy.

The only one in the house who’s not totally on board with you is Molly. She’s a sweet dog, but when you head across the floor to snuggle, she gives us a long-suffering look, and moves right to the other side of the room. Occasionally, she’s in a good mood, though, and will accept your cuddles and pats, most often when she’s getting the same from one of us. That said, she’s always keeping an eye on all of you boys. 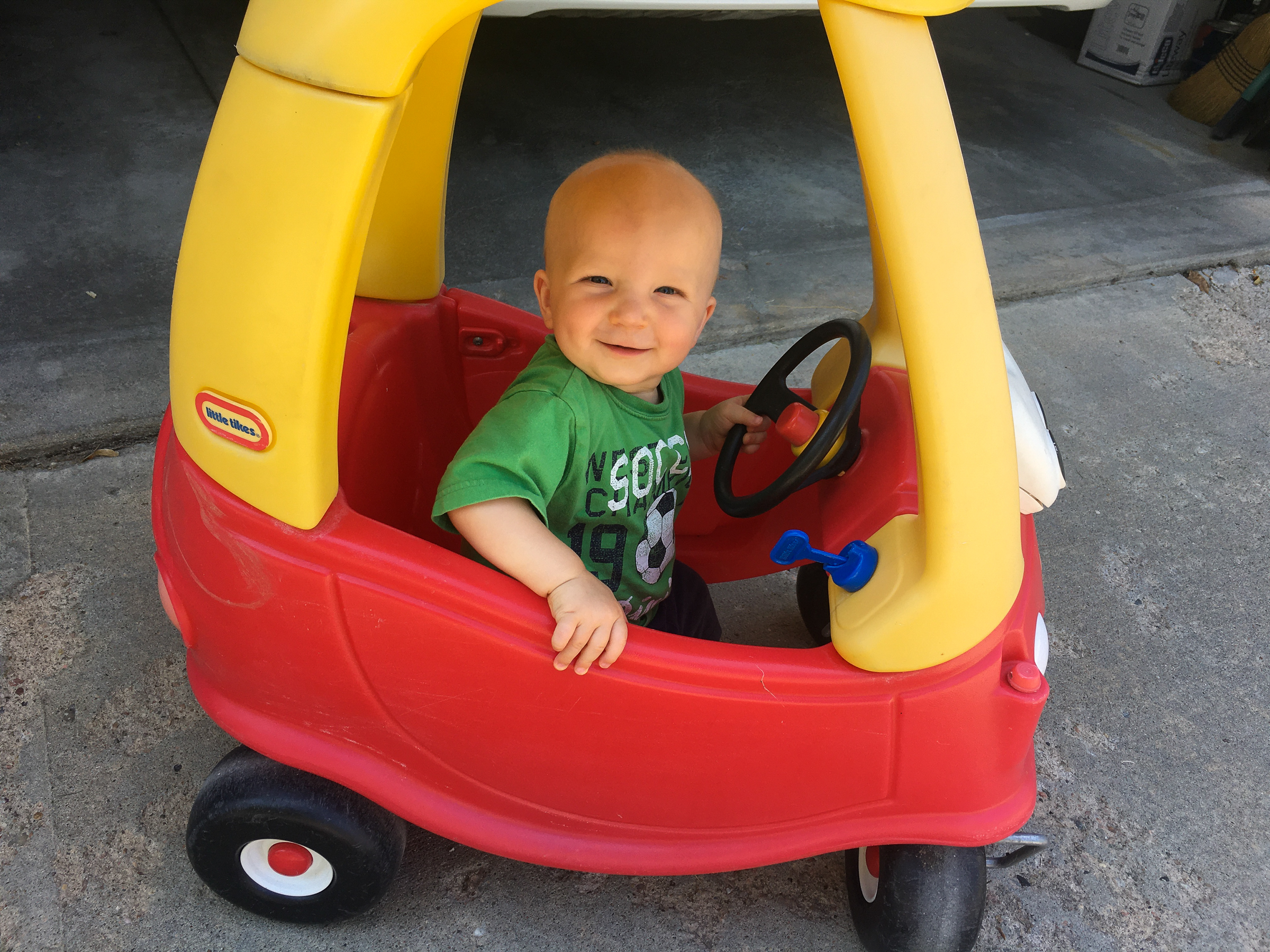 Eight teeth and a little bit of practice has broadened your palette of food quite significantly. It’s game on for taste testing. From meatballs, to cheerios, cheese to yogurt, we’ve tried lots of new foods this month. By and large, you’re pretty much good to eat almost anything. Eating milk also means you get to try out chocolate chip cookies, which were as much of a hit as Lamar’s donuts. It’s good to be the third kid, and be the first to have no food allergies. 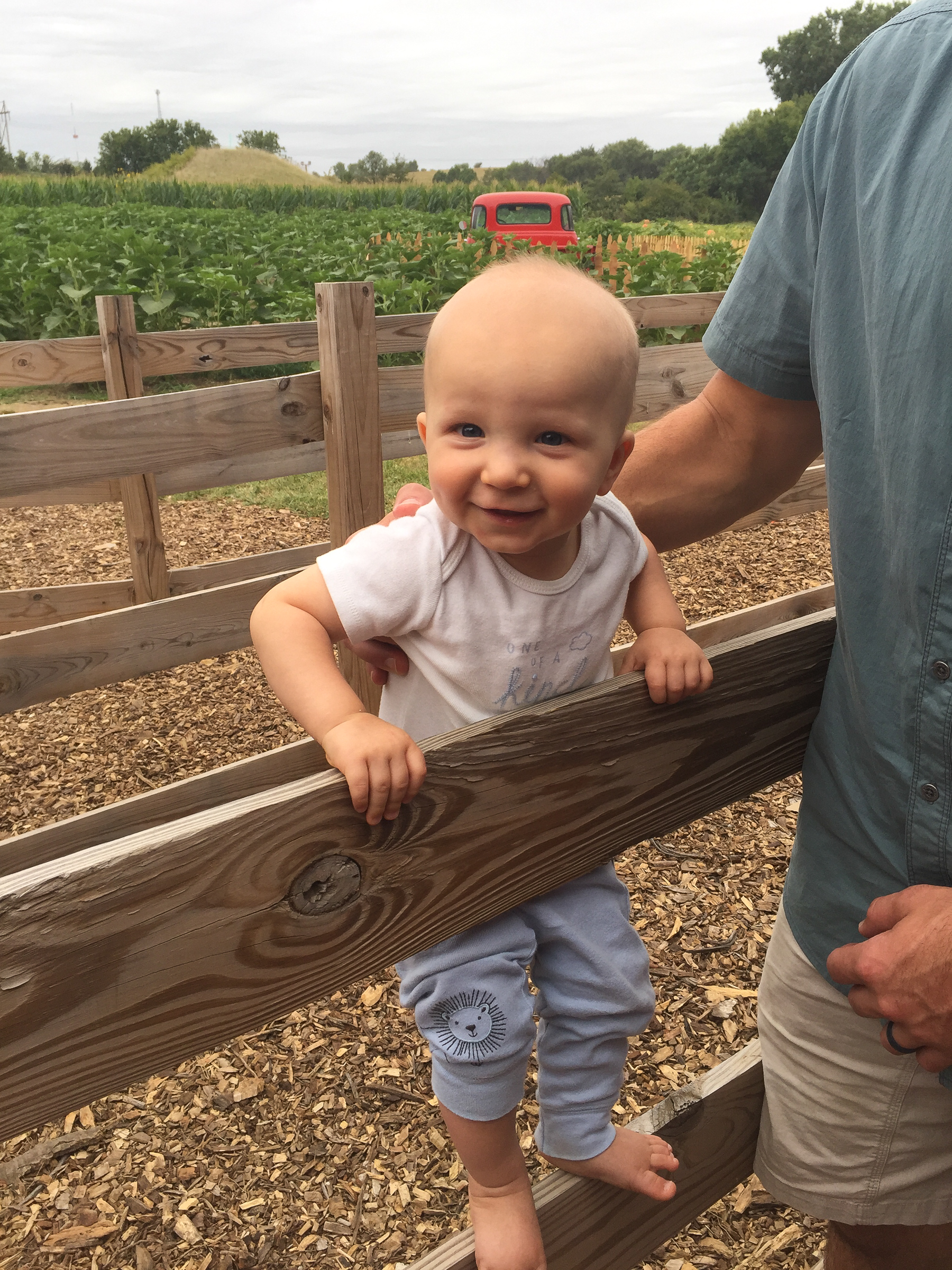 You love bathtubs and swimming pools, and it’s been hot, so there’s been need for both on a regular basis. You’re all about floating around the pool, splashing and smiling. The bathtub brings as much fun, with rubber ducks and other toys. You have floundered your way into blowing bubbles by making noise while putting your face in the water, but I think you were as surprised as we were. 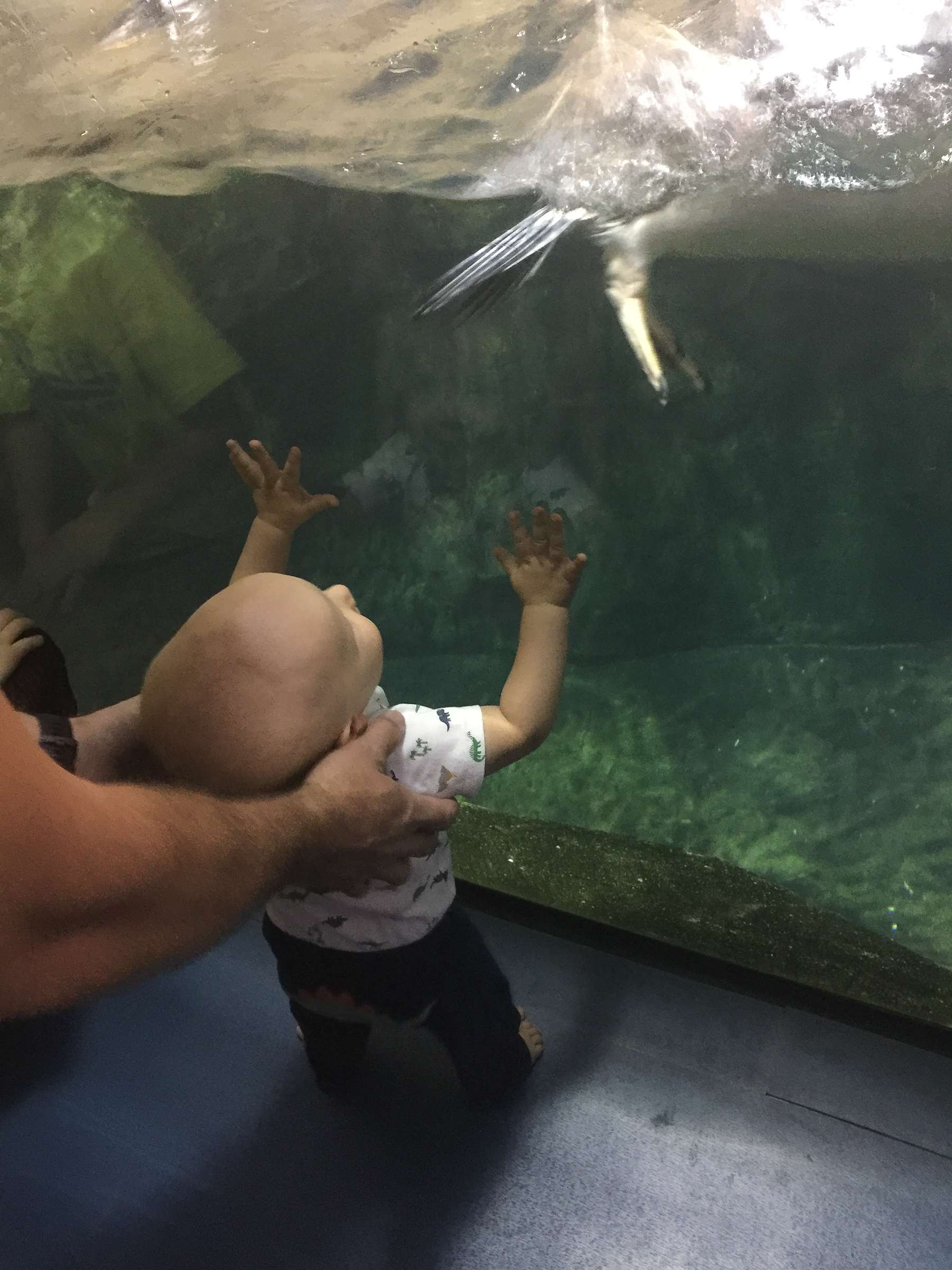 Mommy’s now-significant experience with raising little boys means that you’ve already learned your deep breathing instead of fits. In the middle of a little fit, Mommy suggested that you take a few deep breaths, and demonstrated. Next thing we know, you’re happy to mimic deep breaths, and we hear you from time to time doing it in the stroller or elsewhere. 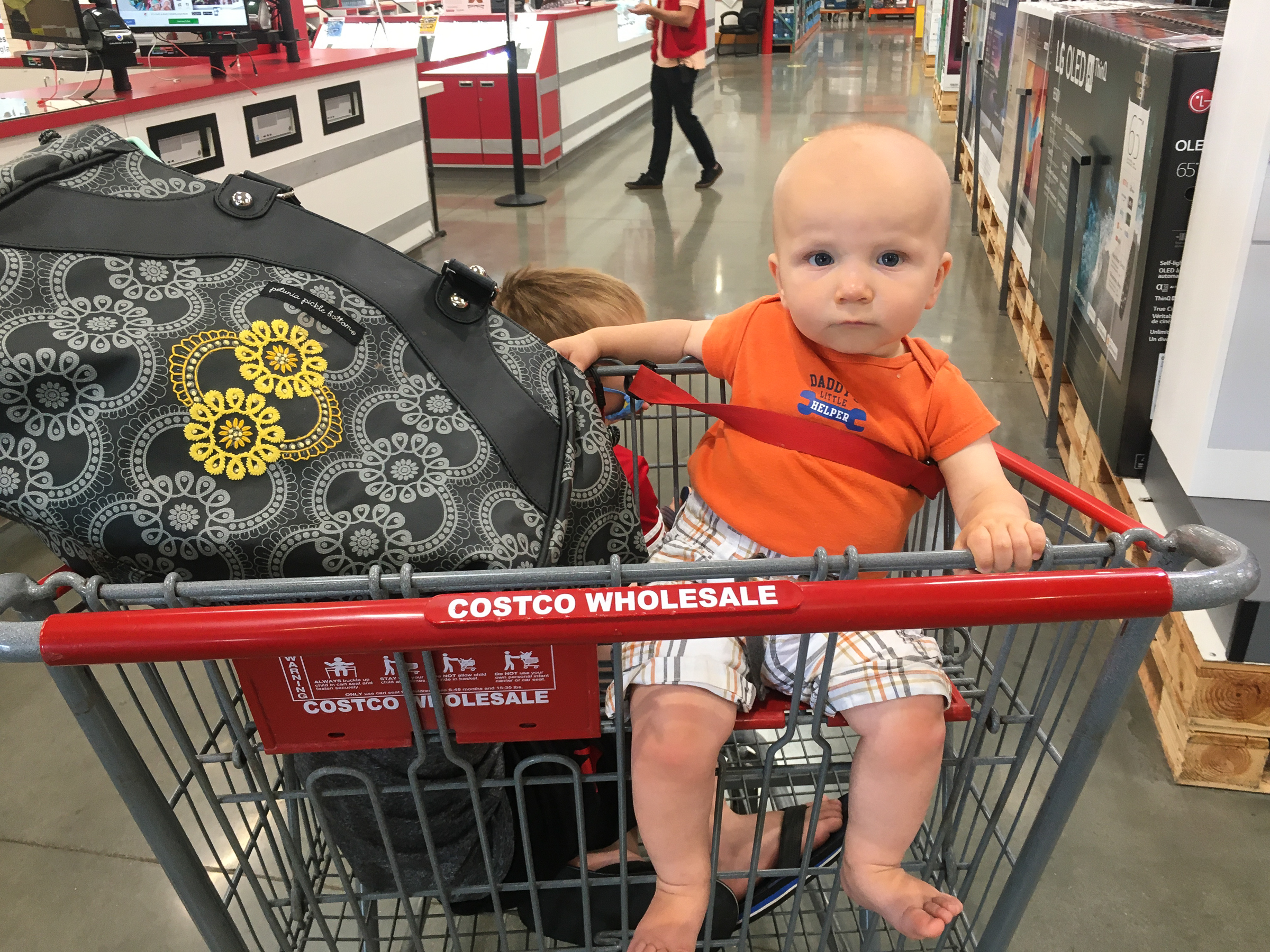 You’ve figured out who you are this month, declaring yourself to be “Ti!” From mirrors to pictures, you’re now recognizing you! We also get this answer in response to “who’s the baby?” This identification as opposed to your brothers, who are both “Seh!” We’ve also gotten to “No!” for Noah, though “Seh” appears to be the general term right now. 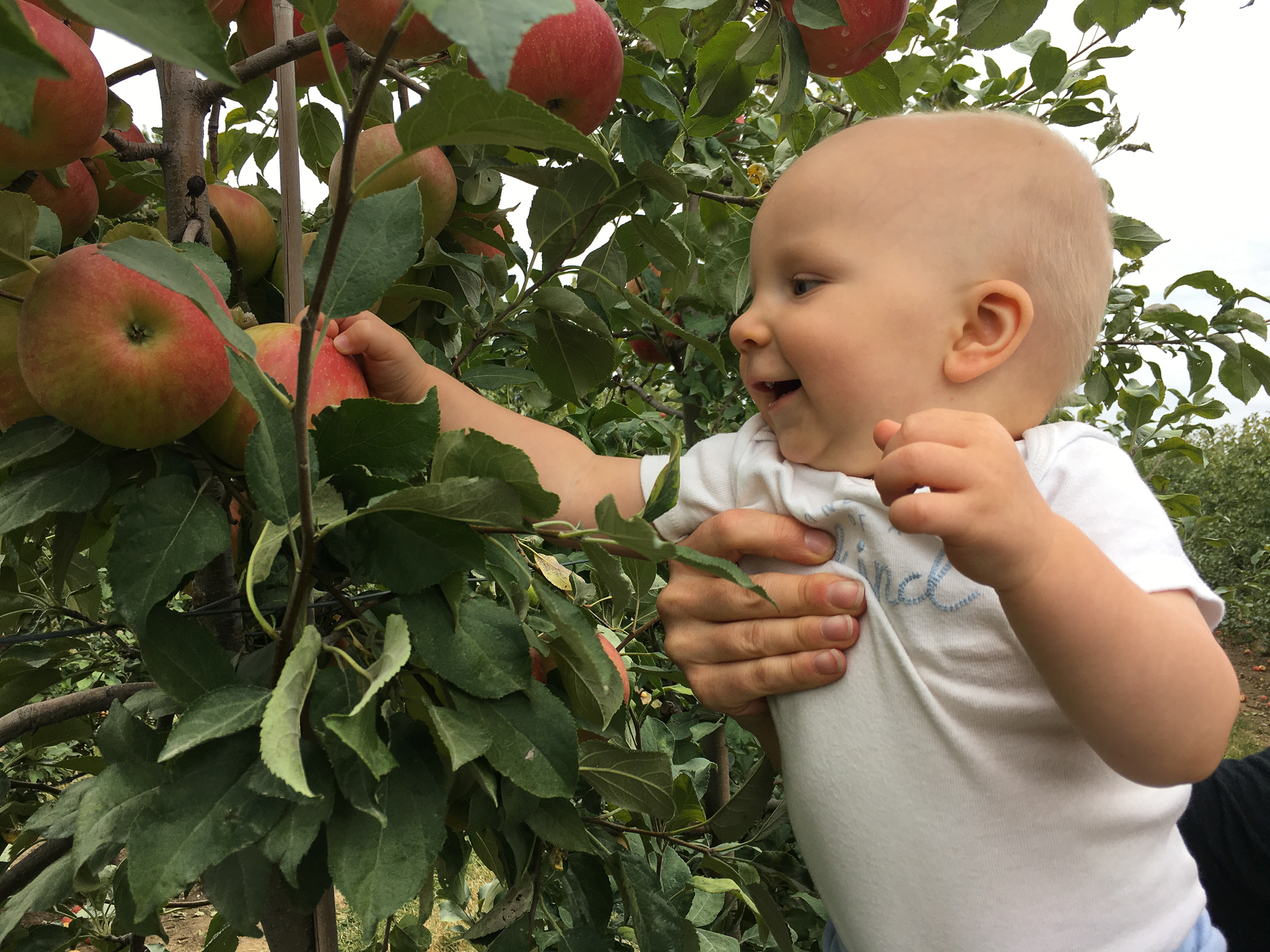 Each day brings small things that make the most precious experiences. When I came in to get you after nap the other day, you had your little blanket bunny in your mouth, just holding one of the knots. You kept that bunny in there for 15 minutes, though a diaper change and sitting in your high chair, until it was actually time for lunch. Precious moments are so wonderful, and seem to make the most fleeting memories. For that, we just have to take pictures and enjoy each day as it comes. We love you lots, and we cherish each day with you! 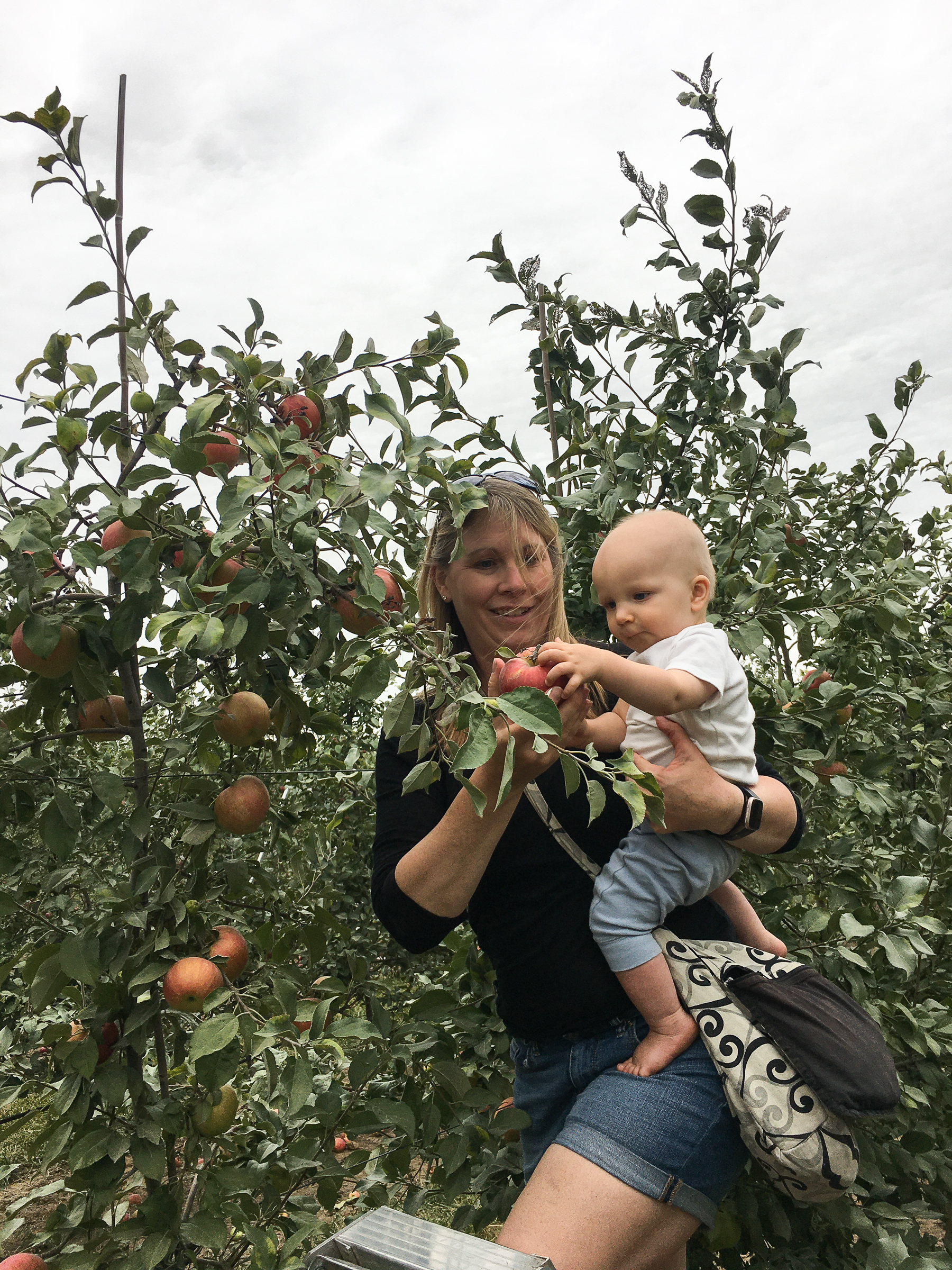 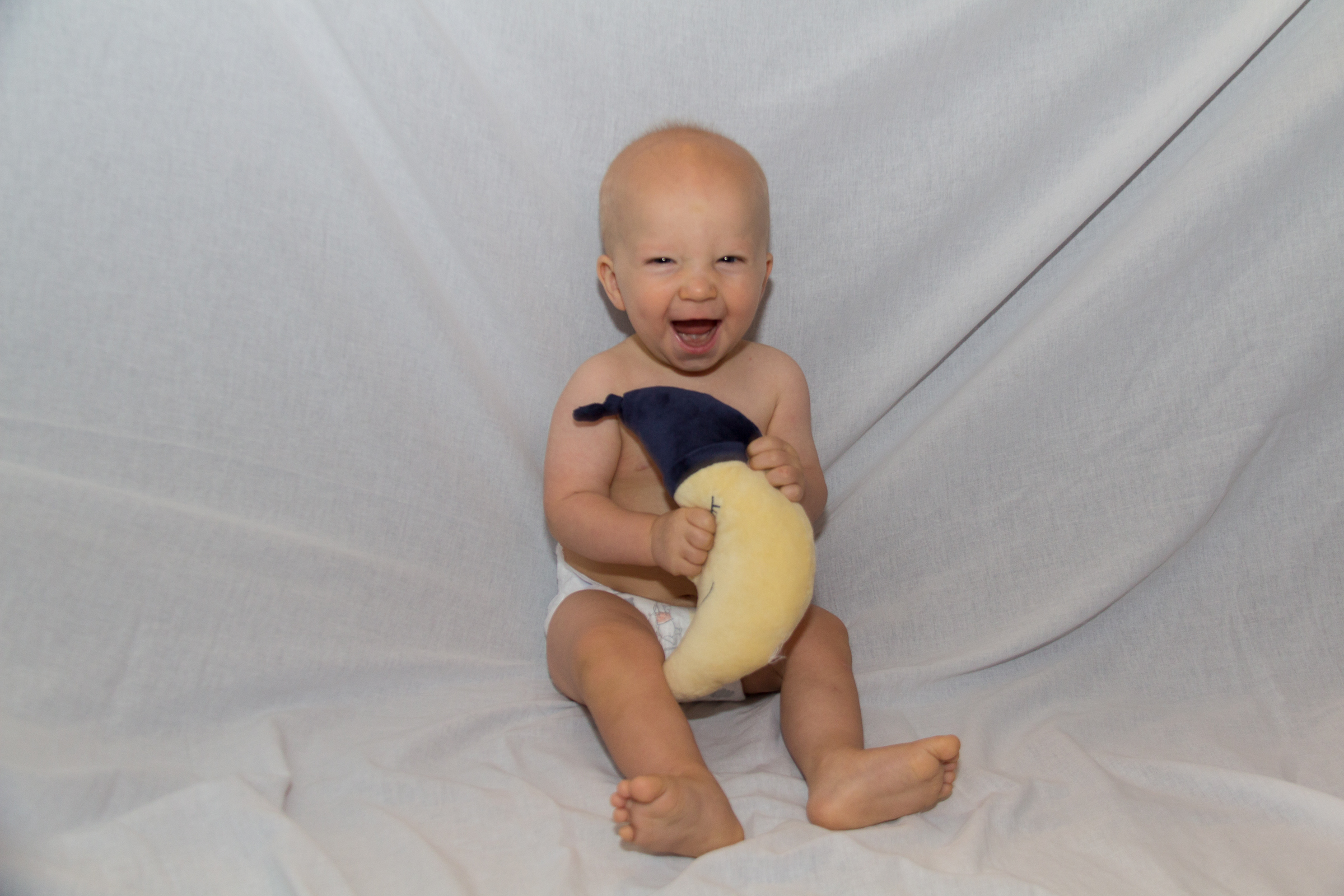