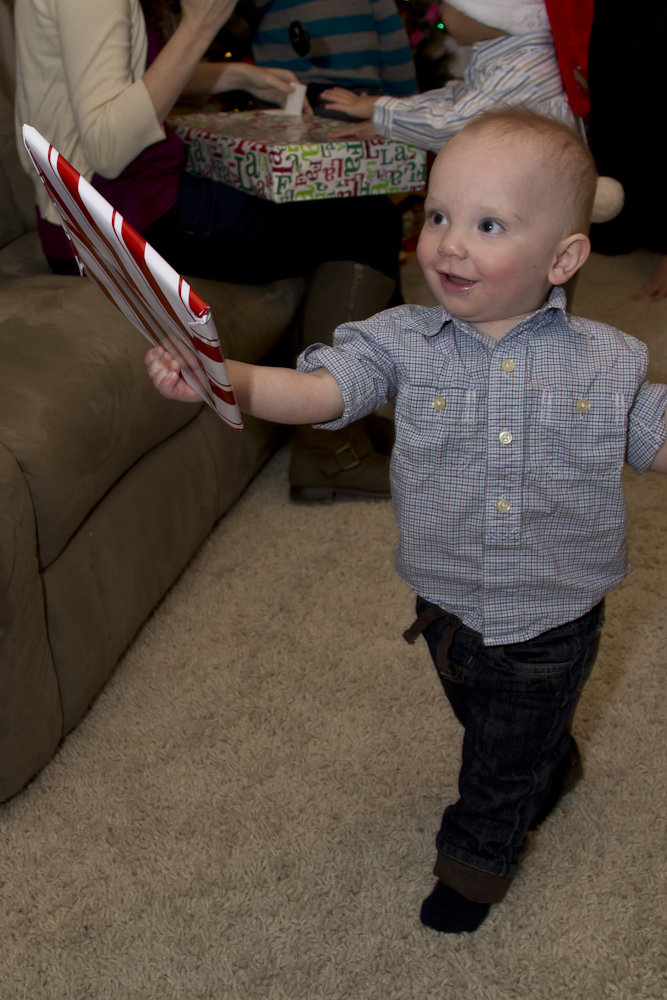 While it’s technically your second Christmas with us, it still feels like the first in so many ways, since you’re running around and talking and handing out presents to people. You’re not so interested in the presents themselves, just the opening the paper and finding out that there’s something inside. Also, stockings are pretty much made just for emptying. We should have just wrapped a whole bunch of empty boxes and put them all under the tree. I have a feeling that won’t work next year. Maybe we’ll try that if you have a sibling. The only thing to distract you was the racquet balls we put in the top of your stocking. You pulled those out, and it was “stocking over”. Of course, life is all about the balls right now. When you saw Santa at the zoo, you happily sat on his lap and announced that you’d like a “ball”, and nothing else. The living room is a cross between a tennis court and a bocce lawn; balls all over the place. 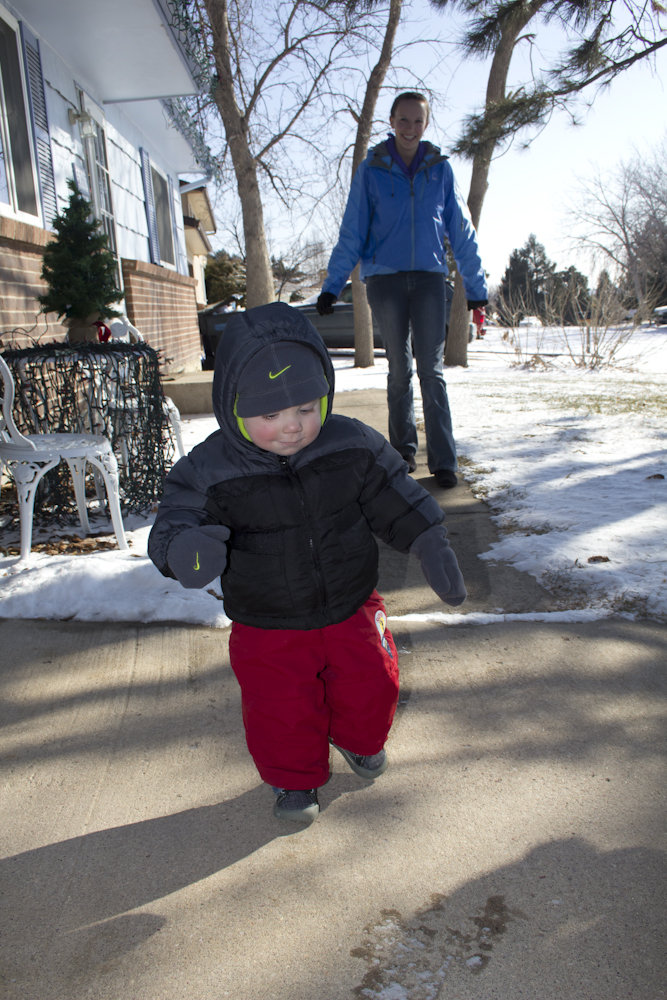 Your continual increase in physical prowess and curiousity has resulted in a whole set of warnings I never thought I’d have to say, from “Seth, we do not lick the wall” to “Seth, we don’t hit the dog with the hammer”. Also, in a very Family Guy dialog, you’ve now started saying “mama, Mama, MAMA” with increasing intensity. The dialog typically sounds like this: 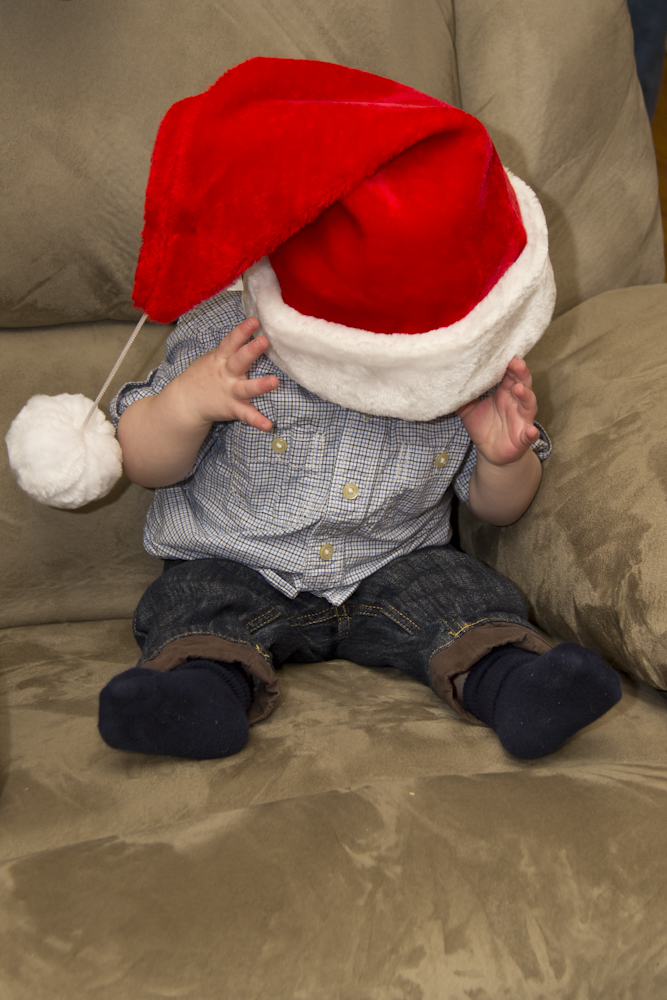 Adventures abound this month. After just two trips, you figured the path from Nana’s house to the park, and decided one day when we went out to play in the snow that you were going to take yourself to the park. You set off down the street, started to cross at the right intersection, and walked the 1/3rd of the mile or so to the park all by yourself. The same day, you climbed up and slid down the big tube slide all by yourself. I wonder how it looks from down there. As you get more coordinated and taller, does the world look smaller? 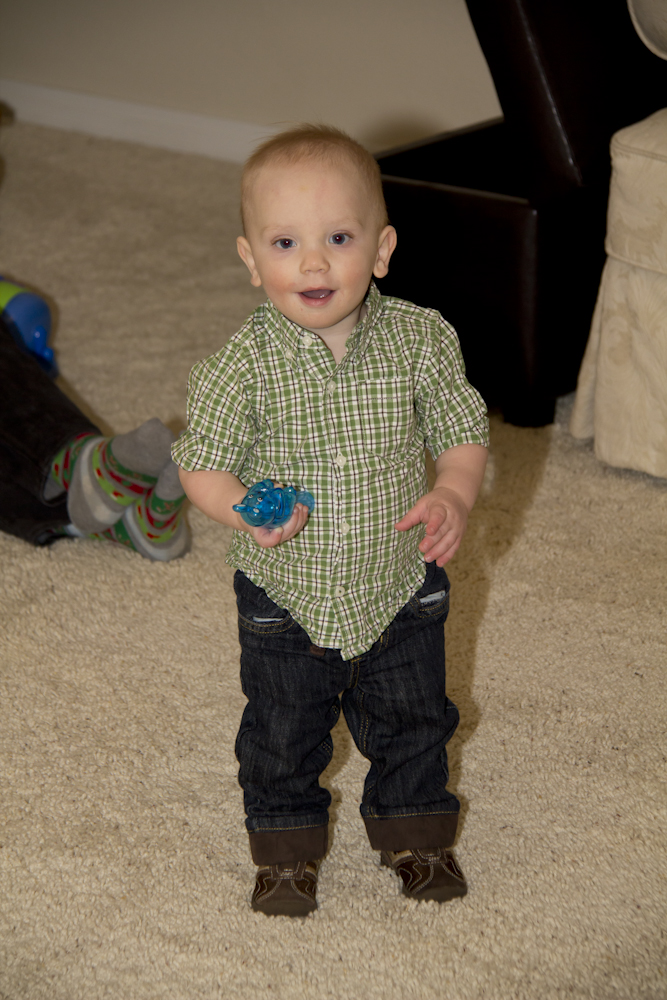 You are either on or off, with no in-between. Your evening energy function starts at 0 around 8:30, and ramps up exponentially the later the hour if we don’t get you into bed. On the trip back home at Christmas, we hit snow and checked into a hotel at 3:30 in the morning. You then proceeded to keep Mommy up the rest of the night running around the ballroom, until she handed you off to me at 6:30. We proceeded to have (second) breakfast together, and you managed to stay up until we got you in your car seat to head for CA.

The world around you provides more and more fascinating things to do and see, connecting concepts and things to the words that you’re learning. That, of course, results in hours of fun as you tell us that you want to “’nuggle” (snuggle), and that you’d like everything from chicken to bread to crackers dipped, asking to “dip it” in whatever we have available. Since the move to CA, we’ve taken to Skype to talk with your grandparents, and you know exactly how it works, enjoying seeing your distant relatives on the iPad. You melt our hearts with all the little ways you see and interact with the world. Not a day goes by that our love for you doesn’t grow, and we don’t find yet one more thing to enjoy doing with you.